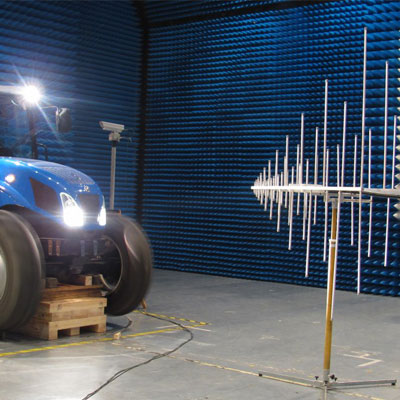 All electrical, electronic and electromechanical devices emit a certain amount of electromagnetic energy to the environment by their nature. Mes Electromagnetic interference. Is the effect of devices or systems from this energy that is produced or present in the environment.

As MOBILITY, we are able to carry out EMC tests within the scope required for both component and vehicle and offer E type approval certificate from Europe.

With the increase of sensitive receivers and strong transmitters around the vehicles, the electromagnetic compatibility of the vehicles has gained importance and even became a necessity.

Within the European Union, all electrical / electronic equipment must be based on this regulation for electromagnetic compatibility.

SCOPE OF THE REGULATION

Nearly all electrical / electronic devices are covered by the EMC directive.

In EMC Laboratory, there are full and semi-reflection rooms with a large volume which are rarely installed in our country. Isotropic probe calibrations in 700 MHz - 40 GHz frequency range in fully non-reflective chamber, directional antenna calibrations in 30 MHz - 40 GHz frequency range can be performed by using semi-reflection chamber and open field test field together.