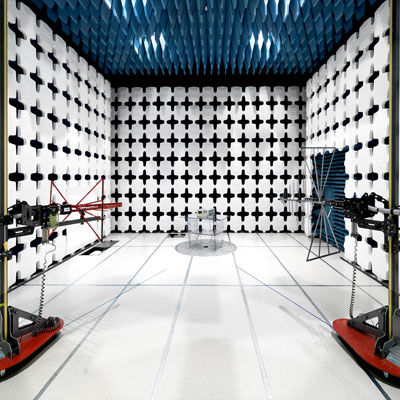 EMC (Electro magnetic compatibility) is the ability of a system to function correctly in an environment without affecting any other system or itself.

Nowadays, with the expansion of electrical and electronic systems, it has become important for them to work without interaction between each other.

There are a number of standards that all these systems must comply with in order to work together and safely.

First, Marconi's experiments and the concepts of magnetic compatibility and magnetic interference that emerged at the end of the 1800 paved the way for atlantic communication technology with the help of cable when the 1900s came to the fore. In the 1920, the first technical articles began to be written and radio frequencies became an important problem in the systems and devices such as engines and railways during 1930 years.

2. During World War II, EMI became a major problem. The problem of the presence and rapid development of transistors in 1950s, integrated circuits in 1960s and microprocessors in 1970s brought to the fore. Occurs due to frequency planning. Numerical marking and integrated circuit technologies have further exacerbated the issue. In 1979, the FCC was established in the United States and issued several standards on this issue. EMI - EMC tests were also performed.

Electromagnetic interference can be defined as any disturbance or sign of natural or human origin at radio frequencies, which leads to a decrease in the performance of electrical and electronic devices, deterioration or malfunction.

To give examples of electromagnetic interference from daily life; When listening to the radio, the radio radios can intervene, mobile phones affect the ABS systems, leakage in the print circuits, noise in the computer while talking to the mobile phone can be listed.

For a device to be considered electromagnetic compliant, 3 is a must:

► Not to cause interference in itself (self-compliance).

► Do not attempt to interfere with other devices.

► be immune to interference from other devices.

What are the precautions for electromagnetic interference?

The first measure to be taken against EMI may be grounding. The purpose of grounding is to reduce the occurrence of radio frequency voltages that may cause electromagnetic interference.

Another measure is the binding method. Bond; If it is considered an electrical connection between two conductors, the bonding method is used to minimize electromagnetic interference, since the reference point is at the same level at each point of the device. This is due to the excellent connections, ie the design of a low impedance circuit.

Another measure that can be taken is filtration. The filters may be designed to prevent electromagnetic interference from conductors. A filter circuit can be designed for each circuit.

The last measure that can be taken is wiring. The cable guides the load to electromagnetic energy. They form the longest parts of the system and therefore act as antennas for transmitting EMI noise from the environment.

What is Electromagnetic Compatibility (EMC)?

As a result of the development of technology, electromagnetic compatibility in electronic device or system design has become as important a design criterion as other traditional design criteria.

Since 1996, EMC standards have become mandatory for electronic devices. For this reason, manufacturers who want to sell their products have to put the "CE" mark on their devices which have passed various tests.

There are various tests on electromagnetic compatibility and interference, both at the device level and at the platform and system level. The criteria used in these tests are EMI - EMC Standards. These standards are the main determinants of the electromagnetic quality of the product. The standards include two important elements:

All these measurements can be performed more easily using the EMI Receiver. In addition, the electric field probe can also be used to measure high areas.

4 is used in all these tests.

The screened room is an isolated area from external electromagnetic environment. Faraday cage is the largest and the first example of this. The non-reflective room is the area where the material absorbs electromagnetic waves on its walls.